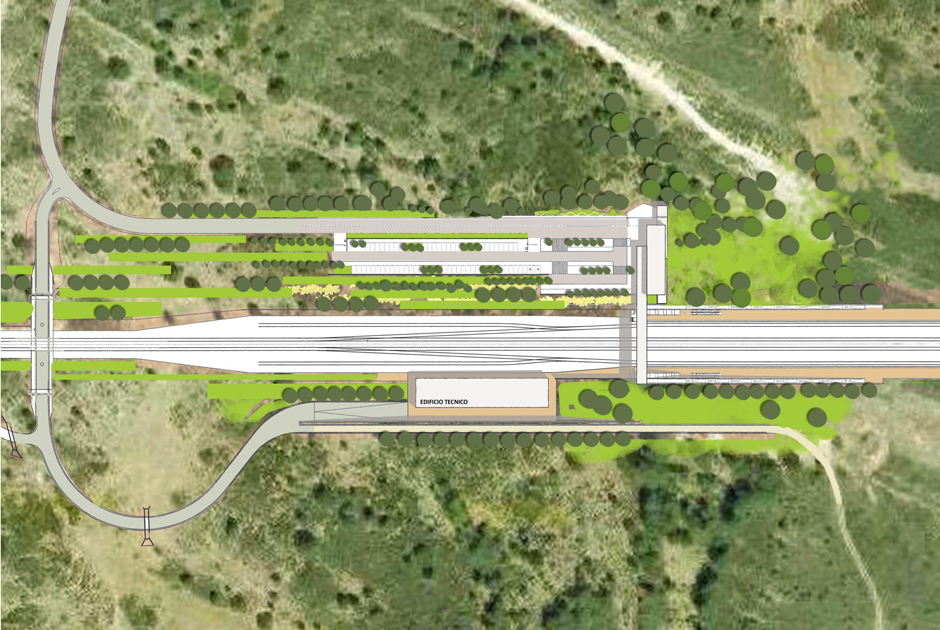 The integration of the building, the landscaping of the surroundings and the search for an energy-efficient and flexible architectural solution are adopted as important criteria both for the implementation of the various installations technologies and a possible future enlargement of the building without compromising its functioning. One of the primordial objectives is that the action be sustainable according to the ADIF Manual de Estación Sostenible 360º and that it achieves the category B Energy Efficiency Certificate.
Thus the choice and determination of the surroundings in which to locate the station, its orientation and layout were determining factors in the planning of the solution. The entire action is focussed on and near the inhabited areas which allows movements to be reduced, the infrastructures in the area to be used and the possible effects to be reduced. The idea is to rationalise the implementation of the roads in the area so that it is as orderly as possible and searching for the greatest integration and enhancing access to the station for public transport, pedestrians and cyclists.
The 500 m2 passengers building is organised on a single level adapted to the existing topography and at the same level as the access road to reduce and facilitate passenger movements. It is arranged perpendicular to the railway platform and connected with a pedestrian walkway to form a single volume in a gesture to offer passengers a façade of greater size and scale, seeking a visual reference and allowing better orientation from the access road. It should not be forgotten that the station is in a natural and practically virgin landscape.