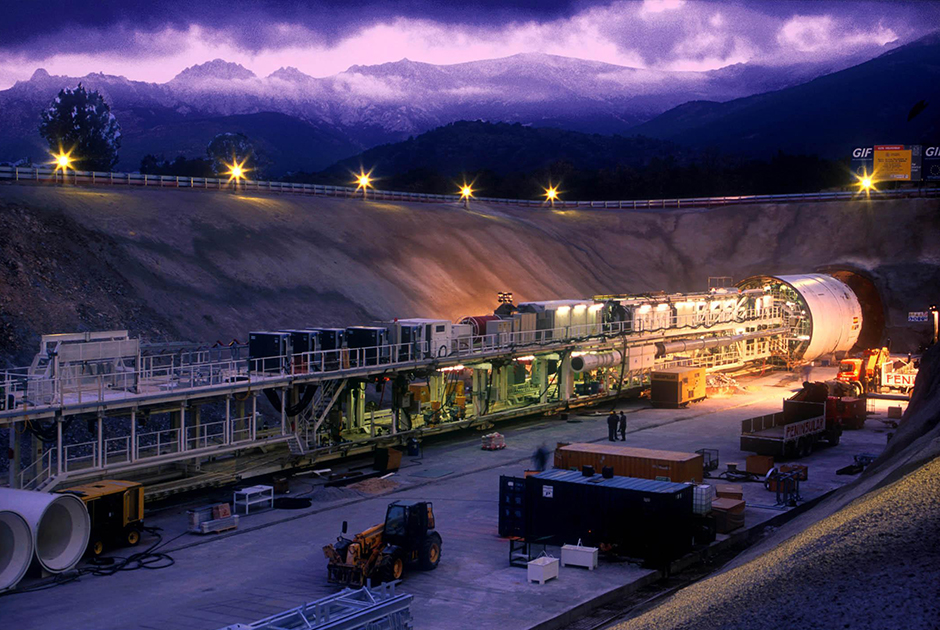 Lot 2 of the southern portal of the Guadarrama tunnel, 16.7 km long, starts in the municipality of Miraflores de la Sierra with the 2,131 m long Soto passing siding and a gradient of 3%. The alignment crosses over the M-608 Soto del Real – Guadalix de la Sierra road and continues over the Matarrubias ravine on a viaduct 660 m long. At 3.4 km from the start, the tracks separate at the southern portals of the two single-track tunnels with a gradient of 3%. The tunnel crosses through the Sierra de la Morcuera with a maximum overburden of 960m (at 5.3 km from the portal) and, on reaching the highest point of the alignment, starts the descent to the end of the section.
The excavation of the tunnel, 13.4 km long and 8.50m internal diameter, was built with two double shields Ø 9.46 m that lined it with precast segments 320 mm thick, forming standard rings with a base segment and internal radius of 8.50m. Each standard ring consists of six segments in addition to the key piece.
For safety, 11 connecting galleries were built between the tunnels, spaced 250m apart, and an emergency room was designed, equivalent to a gallery 500m long with a free width of 5m, totalling somewhat more than 800m of linear excavation. It also included the building of ~300 m of signalling galleries. 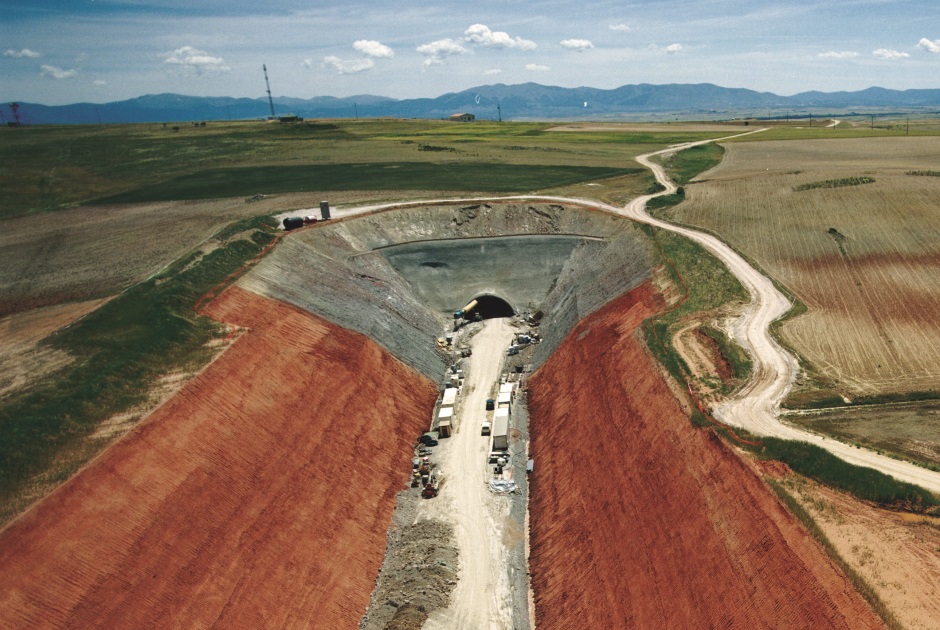 This involved a section 6.7 km long in a straight alignment in plan for almost its entire length. In elevation there are two alignments with slight gradients forming a convex shape near its first fifth part .
The section starts with a cutting with a maximum height of 10m which leads to the Tabladillo tunnel, 2,514 m long, built as a mined tunnel of 1,113m using the NMA, the support varying in seven sections according to the ground.
The rest of the section is built as two cut and cover tunnels with a cross section of 100 m3 on the southern and northern sides, 697 and 704m, respectively. These were built on footings and invert with a pointed arch structure with three radii (4.5, 8 and 12m respectively) of great slimness and a maximum height above the ground level of 9.52m. The vault was built with HA-25 concrete with a thickness varying from 80 cm at the starts to 50 cm at the key.
The alignment ends with a succession of sections in cuttings and embankments.
The project included the repositioning of six tracks and a local road over the cut and cover tunnel, two precast overpasses (initially designed as semi-integral and integral structures) and six culverts.