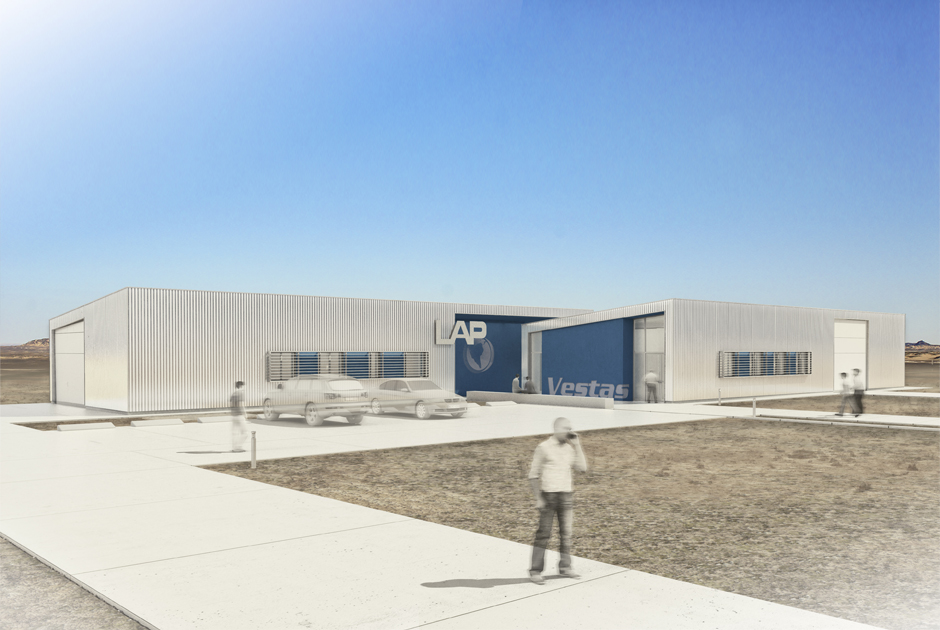 The control building is located on the land of the Estancia Chañaral de Aceituno in the coastal area south of the Freirina commune, province of Huasco, approximately 60 km south of the Port of Huasco and 55 km in a straight line to the west of SIC. The farm has 56 turbines and a total installed capacity of 184.8 MW delivered to the Central Interconnected System (SIC), the equivalent to the average power consumption of more 30,000 Chilean homes.
The planned architectural and functional programme is developed on a 1,000 m2 rectangular site measuring 40 x 25 m. Formally, two independent buildings have been defined to provide self-contained spaces for the farm’s two managers, LAP-SJU and Vestas. Both buildings are located contiguously and are articulated by a common access in the centre of the site, sharing the protected corridor giving access to the common patio. This allows the creation of spaces of shared use and optimises the areas built and the installations systems. The patio allows the creation of a sheltered semi-exterior space protected from the sun and wind.
To optimise the buildings’ response to the arid and windy climate of the area, a constructional system is proposed for the exterior enclosure based on a traditional concrete block construction and roof of concrete joists and vaults, completely “hermetic” to the constant winds blowing from the south, insulated on its outer face with polystyrene sheets and an outer covering on the roofs and walls consisting of silver coloured corrugated sheet steel.