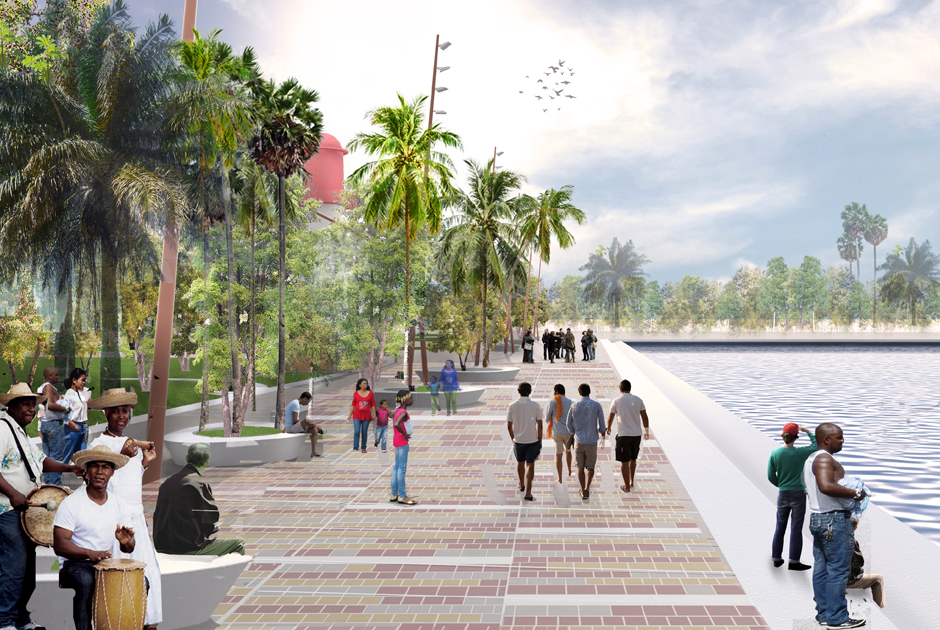 Based on the existing project, the park was reorganised and adapted to convert it into an urban space matching the wishes of the public, more habitable and with a modern image that projects Buenaventura towards the future, considering some of the pre-existing features (trees, brickwork, monuments, etc) that are included in the new arrangement. The area of action is 5.17 ha.
The proposal integrates the traffic needs, enlarging the space for pedestrians, public transport and cyclists in a large avenue that extends to include phase 2 of this project and that will, in the near future, run along the entire urban perimeter of the Isla de Cascajal.
This great tree-lined avenue will form the first of the three bands into which the Malecón has been structured. The other two bands will be the intermediate one, for leisure and sports activities, and the coast, dedicated to the sea promenade with views of the sea and bay.
These three bands match the degree of commercial activity to respond to the demand for service and control throughout the working day and that are supported by a structure of tree-lined paths connecting the first street with the marine promenade by multiple linear paths, creating spaces for walking and staying with fresh and agreeable shaded areas.
With the idea of recovering the sea view (currently blocked by a multitude of fences and buildings along the first avenue), a structure of easily recognisable paths has been planned with direct views between the urban and sea areas. This favours another of the requirements, the improvement of the users’ security and the possibility of control by security guards, police and monitors.

Taking advantage of the excellent opportunities offered by the Colombian city of Buenaventura, the national government has launched initiatives to convert it into a centre for development and attraction of investments that drive economic growth, the creation of employment and social progress.
In this context, Findeter held a private request for tenders to prepare the Buenaventura-Valle del Cauca Special District Industrial, Port, Biodiverse and Eco-tourism Master Plan. The plan must cover the logistics/port and social/territorial ambits, integrate the various initiatives and define the strategic lines for facing the social, environmental, industrial, economic, logistics and port growth and development of Buenaventura with a vision for the city over the next 36 years.
The work is undertaken in three phases.
In the first phase, the general and specific diagnosis is presented of the environmental, urban, economic, port, infrastructures and social features that serve as the starting point for decision taking and strategic definition.
In the second phase, a long-term definition of the city is proposed with structuring and strategic sectorial definitions, identifying the backbone actions and projects for the social and economic development and zoning of the district.
In the third and final phase, Design of the 2050 Buenaventura Master Plan, the structuring, general and sectorial actions and projects proposed in the second phase are developed with the economic and time planning of the various initiatives and must set the roadmap for transforming the district in the next 36 years.