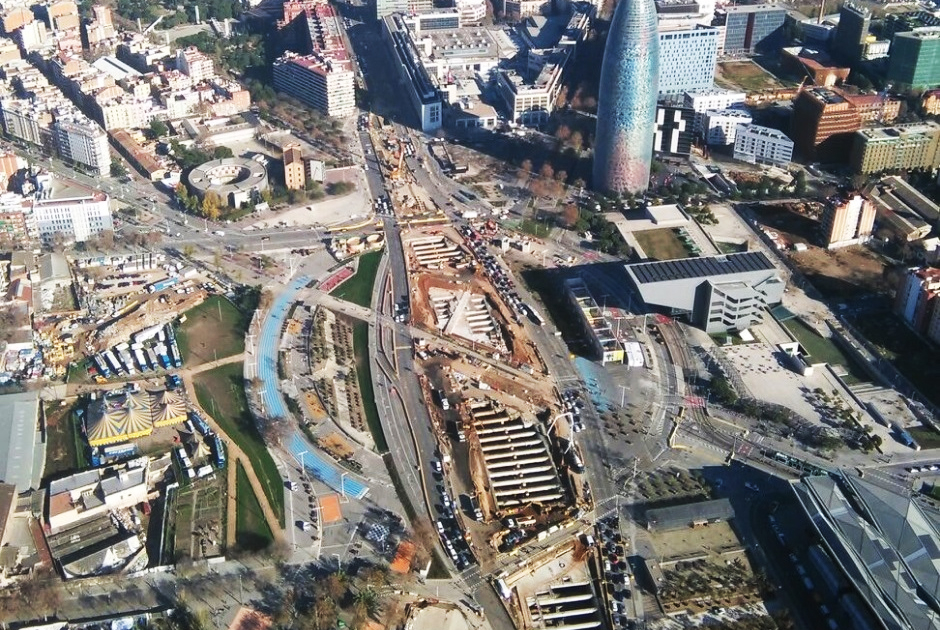 A decade later, studies started for a major town planning operation around the Plaza de las Glorias that consisted of the demolition of the ring road viaducts in  favour of a solution with tunnels to improve the permeability of the city and provide the district with more green spaces. This remodelling also included the moving of the “vells,” the new HUB Design Museum, the enlargement and rehabilitation of the Las Glorias shopping centre, etc.

The road tunnels project was of great complexity, mainly due to the sub-soil. The tunnels had to be compatible with all the existing infrastructures and utilities – railway lines, ramps on old infrastructures – as well as other important conditioners such as the railway branch to the Francia station that affected the landscaping, mobility, etc. 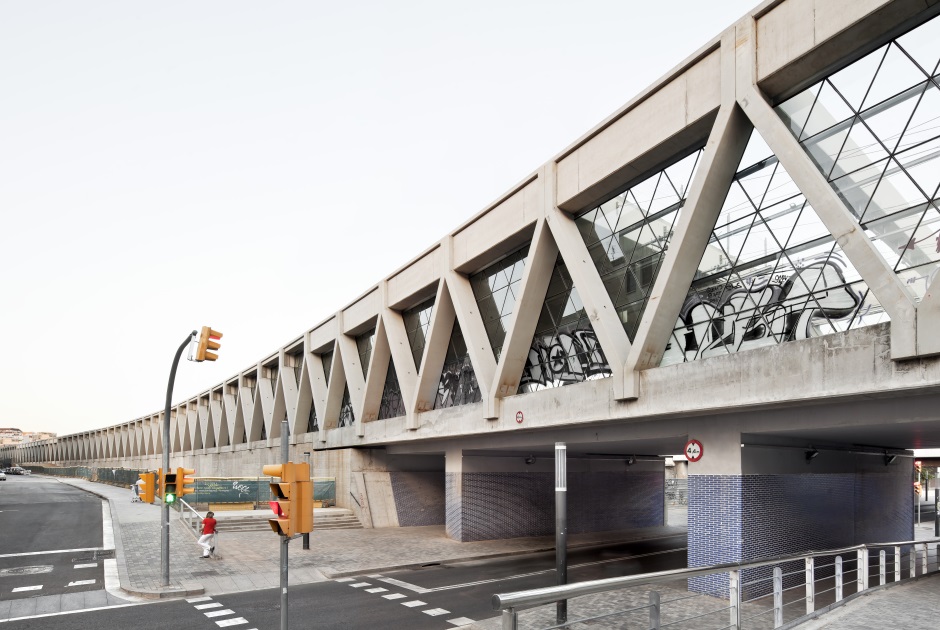 The chellenge of this project was to design the structure for roofing the suburban and metro corridor between Hospitalet de Llobregat and the existing covered area near the Plaza de Sants in a section where the high speed line runs in a tunnel underneath. It forms the central piece of a set of solutionsdesigned to reduce the problem caused by the passing of the railway corridor in the Sants district of Barcelona.
The enclosing structure consists of a system of precast concrete structural latticework supporting the beams and plates forming the roof. The precasting responds to the need to adopt a construction system that allows quick delivery, limiting interruptions to the railway service to short and controlled possessions.
The glazed walls ensure the lightness and transparency of the complex in large sections and a garden avenue is proposed on the 700 m long roof to improve connectivity at the metropolitan level. AThis will allow the permeability of the corridor with overpasses and underpasses to be built with vertical connection elements, ramps, lifts and slopes, thus improving the quality of the adjacent public spaces. 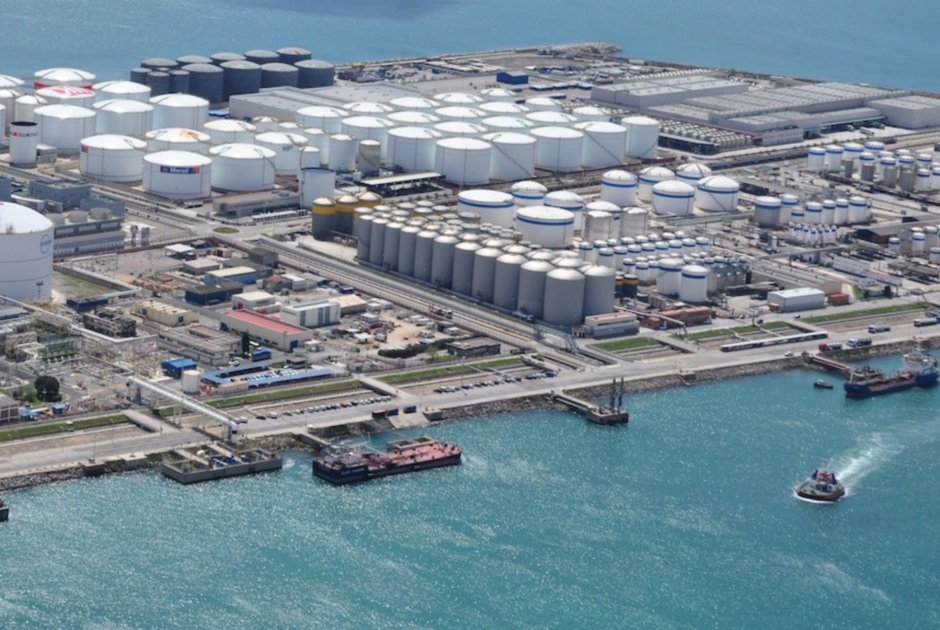 The purpose of this project is to define the connection in mixed gauge – UIC and Iberian – for the sidings in the new Prat mole container terminal with the L’Energia mole terminals.
For the connection it is necessary to adapt the existing railway infrastructure on the L’Energia mole and to define a triangle that allows access by trains from the Can Tunis terminal via Calle 4 or from the Prat terminal mole to the L’Energia mole terminals.
For this it is necessary to replace the existing track mechanisms for ones of mixed gauge. The layout of the exiting tracks makes it necessary to install a manual changer on the line between the Prat mole and the L’Energia mole.
Along its approximately 470m, the alignment crosses over existing sewers. The load-bearing capacity of these sewers had to be checked, concluding that none of them needed reinforcing. Likewise, the repositioning of affected utilities was defined including a high voltage power line, high pressure gas pipeline and telecommunications line. 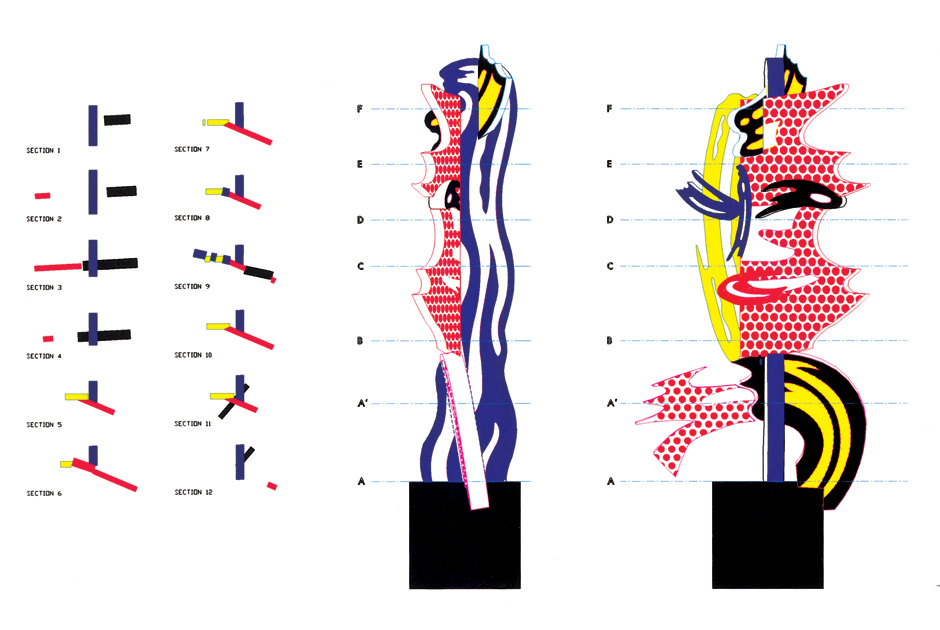 The use of the technology for building post-stressed bridges with precast segments made it possible to construct this 14 m high sculpture created by the American artist Roy Lichtenstein for the Olympic Games in Barcelona.
This project is a clear example of the variety of post-stressed concrete applications. Based on a 1:12 scale model and templates provided by Lichtenstein, the geometry was defined with a 3-D computer model using specific programs developed by Esteyco.
Because of the sculpture’s complex forms, it was decided to use solid concrete with stainless steel fibres to improve its strength in traction and ensuring the maximum durability of the sculpture, located on the edge of the sea, and to facilitate the adherence of the outer ceramic coating. Because of the sculpture’s great weight, it was decided to build it in eight segments prefabricated in the workshop with maximum weights of 20 tonnes and of sizes suitable for transporting to and installing on the site. These were stitched together and tensioned from the chamber in the pedestal using 10 cables with four 0.6 inch threads; the joints between the pieces were treated with epoxy resin mortar. 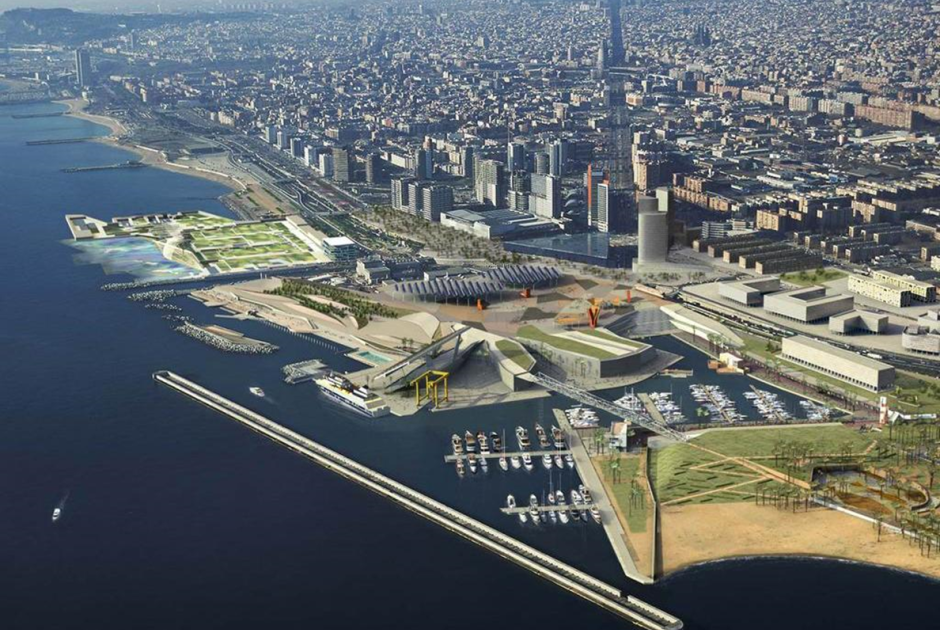 For Barcelona, the actions connected to the 2004 Universal Cultures Forum involved a great reconstruction operation in an area of the city that was mainly residential until recently. The area covers 214 hectares and includes the renovation of important metropolitan infrastructures, the conversion of the Besós treatment plant, the creation of the new Besós marina and the implementation of a new central area with hotels, conference centres, shopping centres, offices and homes. By straightening the coastline and reclaiming land from the sea, the end purpose is to recover land for the city and to create a focus of activity of great potential, given its excellent location at the meeting point of major roads and infrastructures.
In this ambit, Esteyco participated in various projects relating to the main area – the landscaping of the esplanade, the covering of the Ronda Litoral, the Sailing School, the auditorium and the photovoltaic pergola.
The landscaping project, undertaken in collaboration with the architects Elías Torres and J A Martínez Lapeña, covers an area of some 90 hectares. The main feature is the existence of a raised floor on the treatment plant roof structure and the Ronda Litoral housing a complex system of utilities to provide maximum flexibility for future use. Coloured paving and flower beds extend over the raised floor to give the final finish to the plaza. 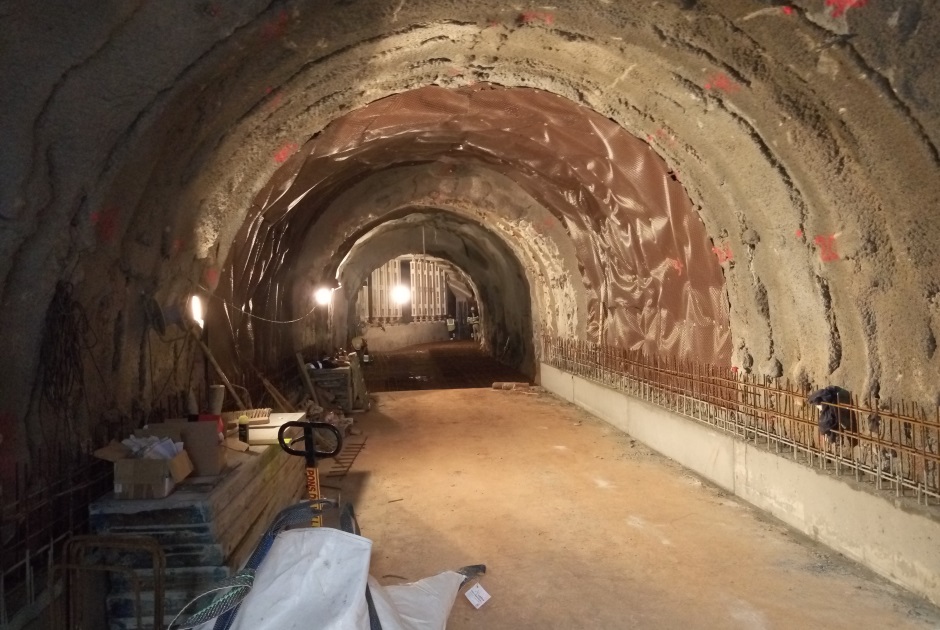 With an lengtht 508m and intersected by a multitude of underground infrastructure, notably four railway tunnels built between 1940 and 1990, the road tunnel under the Plaça de Les Glòries in Barcelona is configured with four main areas, access ramps at both ends and two central shafts between tunnels. Built between diaphragm walls, the four spaces are connected by three horizontal passes under the existing tunnels. The central shafts reach excavation depths of up to 26m, 13 of them below the water table level and with bracing on the roof.  Two levels of intermediate supports are necessary and a double invert at the bottom that is supported on the side walls of the shafts and under a central alignment of low walls.

The three passes under the railway tunnels have a twin cell box geometry and were built by successive advances under a bank of steel and concrete rings 1,100 mm in diameter, sunk beforehand. The bank of rings formed protection during the phase of excavation in steps while providing solidity and stiffness to the infrastructures above, which remained in service during their construction.