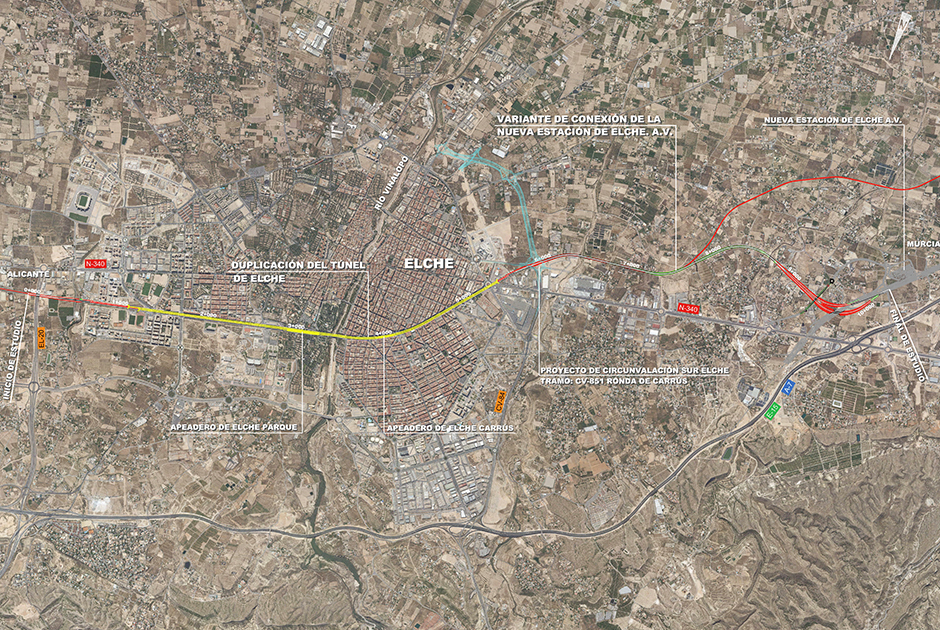 The Environmental Impact Study for the information study for the connection of the new high speed station with the town centre was prepared to comply with Law 21/2013, 9 December, on environmental assessment, since it is an activity within Group 6 – Infrastructures projects, b) Railways: 1. Construction of railway lines for long distance traffic in Annex I. The study was undertaken according to article 35 of Law 21/2013 and its Annex VI.
The Elche bypass starts at the exit from the tunnel on the Alicante – Murcia railway line, from the viaduct crossing the Barranco de los Arcos, and continues towards Crevillente on the existing railway platform between fields, wasteland and rural buildings. In the Llanos de San José rural section, the alignment runs between properties with dispersed rural buildings and, after crossing the Barranco de Barbasena, connects with the new Elche high speed station.
The most important effects occur predictably in the socio-economic area and in the cultural resources, followed by the environmental factors.  The preventive and corrective measures defined are aimed at mitigating these effects. As well as the preventive measures in the  environmental management of the works, it is proposed to excavate, clean and document the “Cavidad de Matola” site, install an elastic blanket between sleepers and under the ballast to prevent the emission of vibrations and to re-plant and condition the surroundings of the works, among others.