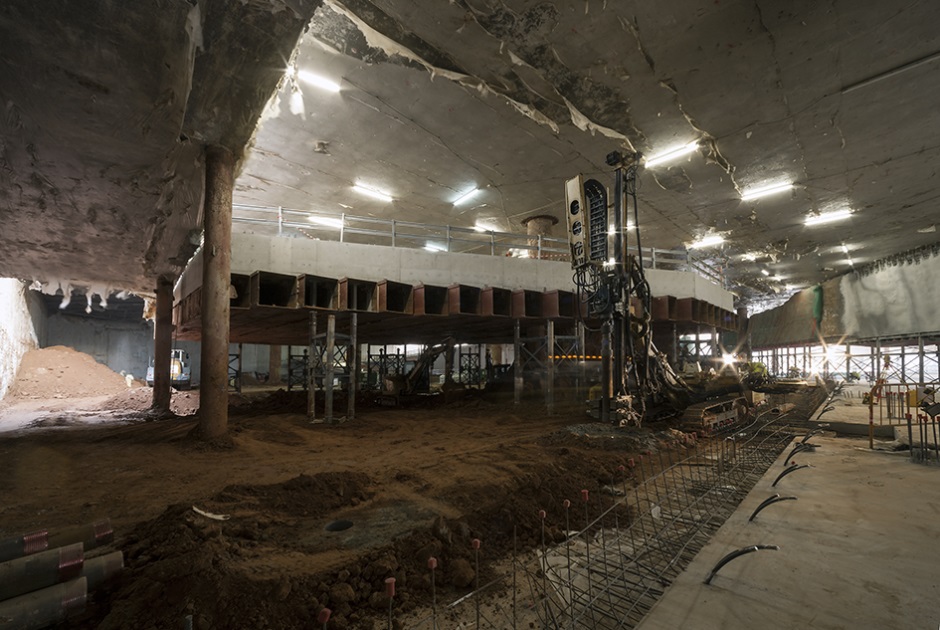 CLIENT I  RAVETLLAT I RIBES

The Sant Antoni market is located in the Ensanche de Cerdà, between the Paralelo and the Raval district. The existing building, inaugurated in 1882, consists of four halls of identical dimensions in the form of a cross connected in the centre forming an octagon crowned by a central skylight. The building has a total area of 11,264 m2.

The rehabilitation and enlargement works were divided into two phases. In the first, four underground floors were built, the first for shops and the rest for various uses – parking, goods entrance and storage areas – generating more than 46,000 m2 of newly-built area.

The second phase involved the integral rehabilitation of the historic building, at all times conserving the original steel structure. For this, supports were designed for it on the new concrete slab covering the underground floors and its pathologies were repaired. The asbestos roof, the facade and skylights were also replaced and new cool and charming stops were built. 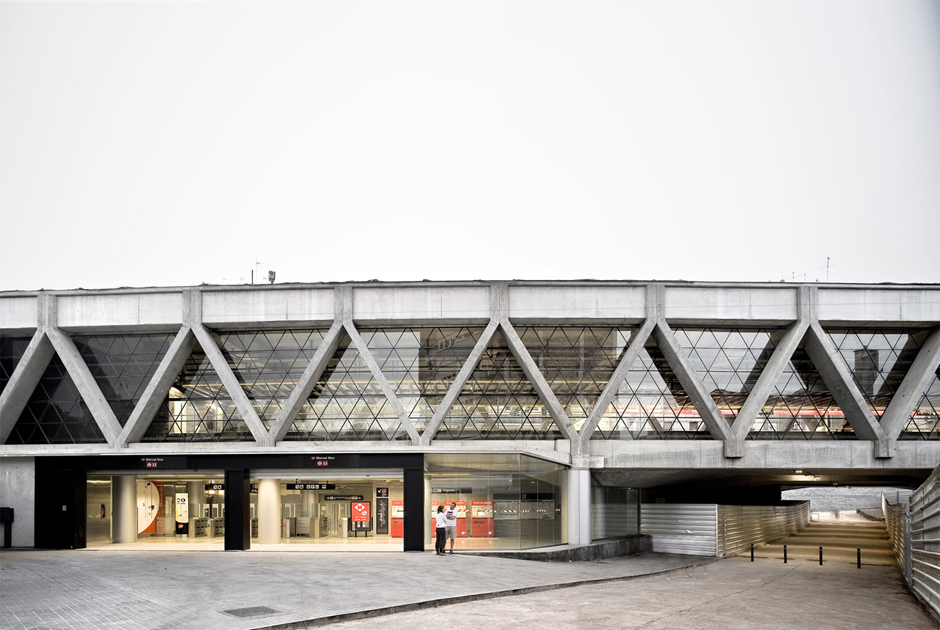 The project is framed within a global action between the Santa Eulàlia station and the Sants station, involving the implementation of the high speed line and the covering of the Renfe and Metro lines.
It involves the definition of all the work necessary for remodelling the Mercat Nou station on line 1 of the Ferrocarril Metropolità de Barcelona metro.
It includes a new access lobby and the covering of the tracks in the area of the station. The solution adopted is fully adapted for the handicapped and modifies the station’s functioning scheme, changing from two side platforms to a single central platform. 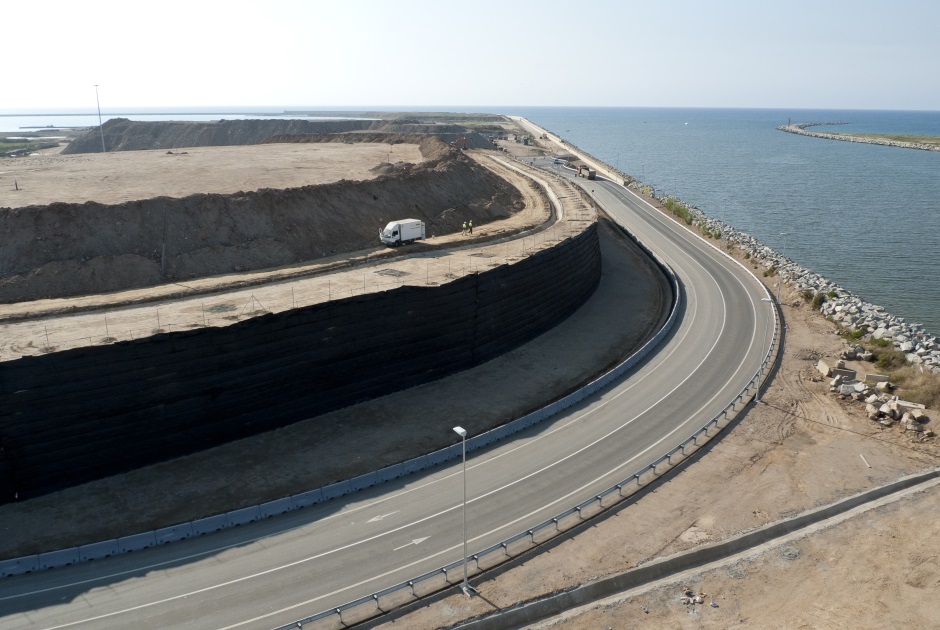 CLIENT: Port Authority of Barcelona
Barcelona (Spain)
The project is framed within the growth plan for the new container terminal in the Port of Barcelona (Best), operated by Tercat and officially inaugurated in 2012. With the building of the southern and eastern dykes and the Prat mole, the new terminal has doubled its capacity for handling containers, with 2.65 million TEUs in the first phase of its implementation. The result has been the consolidation of the port as the main logistics centre and connection point on the Mediterranean, able to compete with the ports in the north of Europe. In 2010, the Barcelona Port Authority commissioned Esteyco to prepare the construction project for access infrastructure for phase 1 of the southern expansion. The implementation of phase 1 was complex and from the start took into account the need to the undertake successive phases. The superimposition of accesses by road and rail as well as the unfavourable geotechnical  conditions influenced the technical solutions in this complex project which was finally undertaken successfully in nine months. Notable among the work carried out by Esteyco was the implementation of the embankment forming the southern connection by overloading and containing with reinforced earth 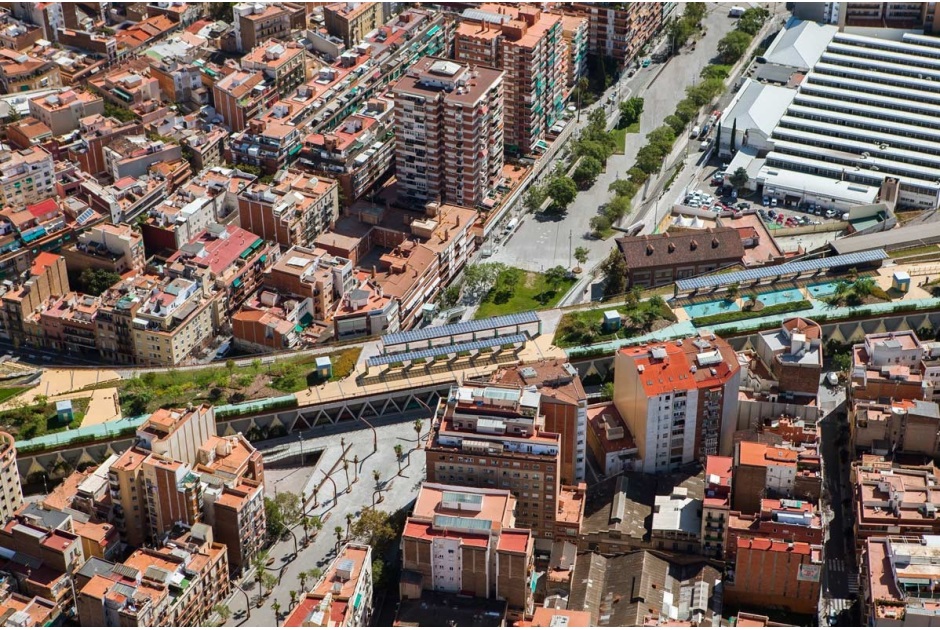 The roofing of the railway corridor accessing Sants station was an objective sought for a long time by Barcelona City Council to improve the environmental conditions of noise, vibration and the barrier effect on the transverse permeability suffered by the districts in the station area. The project was developed with the building of a double height roof some 760 m long and an area of 22,500 m2. The side enclosures of the roof, which generate a facade with an area of more than 11,300 m2, consist mostly of a diagonal wall of precast concrete, using glass to enclose the open spaces between the pieces and opaque enclosures where plant covering is planned.
The later landscaping extends both to the area of the roof and to the areas next to the railway corridor which, together with the provision of ramps, stairs and lifts between the various levels, form a large accessible avenue perfectly integrated into the urban environment and forming a vital area of great quality. The roof landscaping work terminated on 20 August 2016, generating a new quality urban space.
Esteyco developed the various constructional projects that contributed since 2005 to bring to reality the set of actions needed to undertake this important urban action for the city of Barcelona, generating more than 33,000 m2 of quality public space. 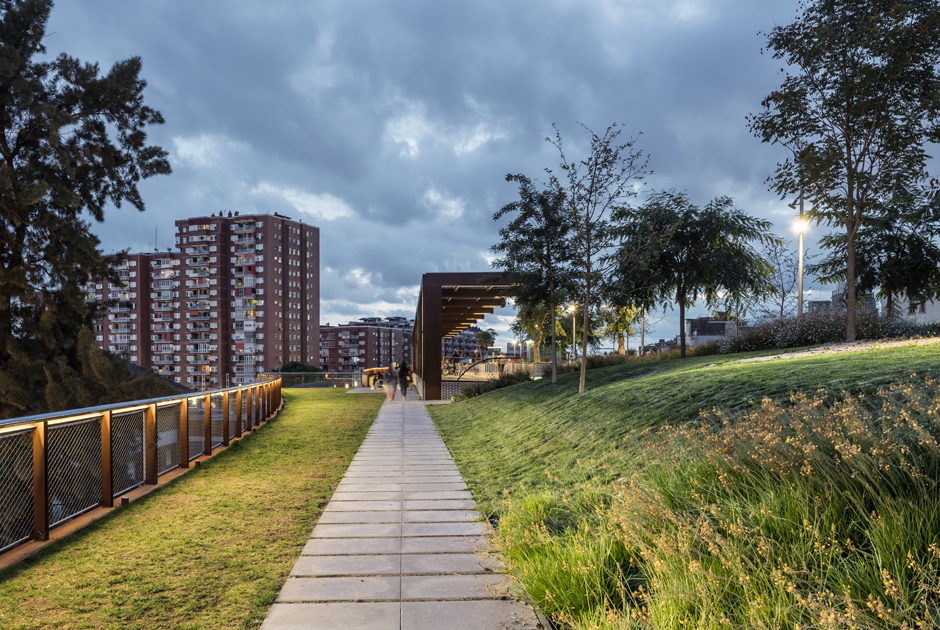 The arrival of the high speed railway at Sants station has propitiated the landscaping of an area of the district fragmented since the entry of the railway in the city. The project includes the covering of the railway as well as its adjoining spaces, small plazas and underpasses, totalling 800 m on the railway corridor, an area of 33,740 m2 to be landscaped.
The project’s objectives also include the incorporation of the improvement of the transverse pedestrian permeability by building adapted routes – with ramps, lifts and escalators – as well as the improvement of the environmental conditions in the district against noise and vibration.
The layout of slopes and pedestrian paths allows the creation of a quality urban space in which the central axis is perceived as a wide green avenue on the roof of the railway corridor, converting this degraded space into a central focus for the Sants district, a large green corridor that connects the resulting free spaces in the railway area both longitudinally and transversely. 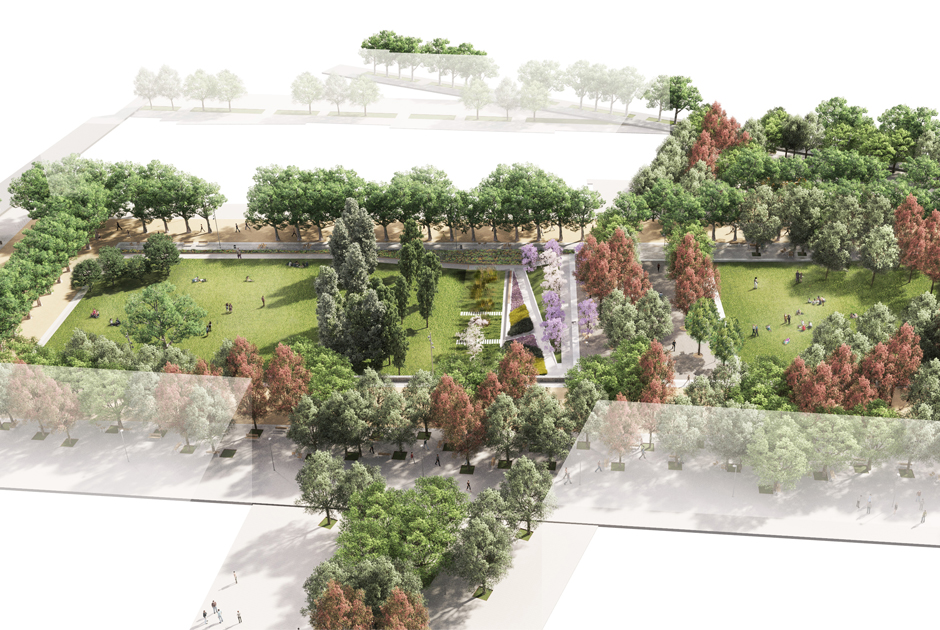 The new Marina del Prat Vermell district, promoted by the modification to the Barcelona City Council general metropolitan plan, defines la transformation of the industrial land in the Marina del Prat Vermell in a progressive process over time that allows the temporary co-existence of new residential uses and economic activity, the current activities with the buildings that the project will conserve in later development.
The landscaping proposals are linked to the principle of sustainability to create a habitable district with a policy of use, energy management and respect for the environment.
The landscaping includes the implementation of dense systems of utilities – water, gas, electricity, lighting, telecommunications, irrigation, sewerage, sustainable drainage and pneumatic organic rubbish collection and reserves space for the installation of the heating and cooling system.
A sustainable drainage system (SUDS) is planned to collect rain water from the paved surfaces and roofs to an infiltration point under the green spaces instead of discharging it directly to the single sewerage system.
The Special Infrastructures Plan includes the implementation of streets, public transport, landscaping of streets and green areas as well as the deployment of all the utilities for the new district in which the construction of almost 11,000 new homes is planned.